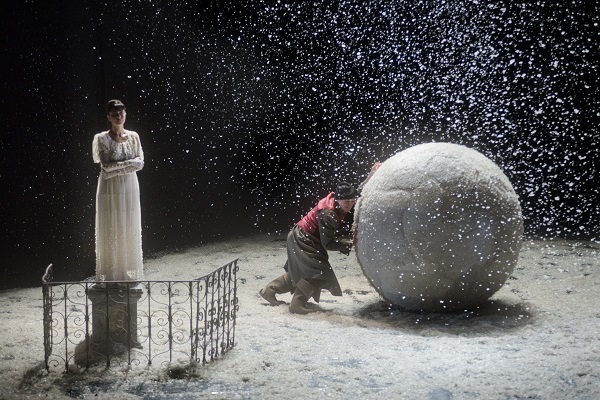 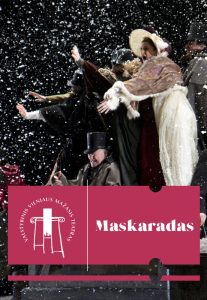 Rimas Tuminas’ performance “Masquerade” is one of the most unique and long-lasting performances of Lithuanian theater, performed for more than 20 years. In this unique performance, the director conveyed his approach to today’s world permeated with a sense of threat, using a work close to his soul by the author of romanticism, Mikhail Lermontov. All of Rimas Tuminas’ performances celebrate the audience, allow them to experience the almost childish joy of the festival, but the Masquerade probably surpasses everyone, there is something for both the thinking and the thirsty for beauty and humor. The story of love, the epicenter of which becomes a lost bracelet, is wrapped in a wide variety of characters – gamblers, ladies, baronesses, princes, servants and those you will not name exactly. The spells of the Vilnius Small Theater Masquerade do not come from the rage of masked balls. Acting, directing, the scenography conveys a celebration that lasts for only an instant and its constant longing, which is not abandoned long after the end of the performance. The atmosphere of the performance can be described in the words of the director: “Imagine that you are in St. Petersburg, when there is cold outside, the ice is clear, sometimes very slippery. And that ice reflects the stars. You play on such a stage, in St. Petersburg at that time, you are among the people of that city. ”Romantic 19th century the melodrama turned into an eccentric and melancholy tragicomedy in the hands of a talented director. This enchanting beauty show, spreading the sounds of fresh and longing Khachaturian waltz and snow falling in an empty black stage space, nostalgically reflects the cultural experience of the last century, reminiscent of the Brecht and Strehler theaters, the Broadcasts and Fellini.

The performance, which has entered the Golden Theater of the Lithuanian Theater, has traveled to many countries around the world – from Sweden to Italy, from South Korea to Mexico – and won several prestigious awards, including the Lithuanian Christopher and the highest Russian theater award “Golden Mask”. After the Masquerade tour in Great Britain in 1999. the daily The Guardian named the Vilnius troupe one of the best in the world.